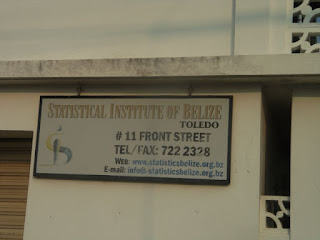 Hmm, it is difficult to believe that any kind of institute located itself in Punta Gorda, Belize.

Posted by Holabitubbe at 7:09 PM No comments: 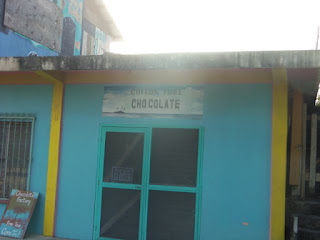 Posted by Holabitubbe at 7:08 PM No comments: 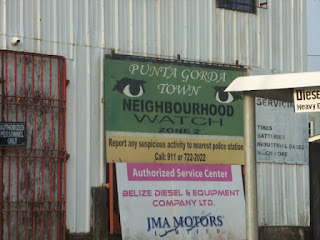 I am not sure exactly what crime there is in Punta Gorda, Belize, but this town is ready.

Posted by Holabitubbe at 7:07 PM No comments: 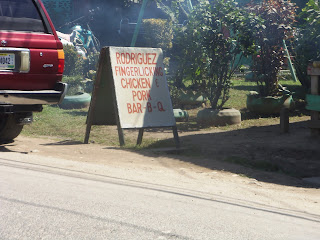 Influences in Belize from American TV--'finger-licking'
Posted by Holabitubbe at 12:13 PM No comments:

More on Changes in the Choctaw Language

While working on the Choctaw language, I encountered an interesting phenomenon: There are two forms for the possessive for body parts. One form, the sa form is the most prevalent, and it indicates a kind of intrinsic possession. Another form that is used by some speakers is the am form. This kind of possession is used with things that are owned and are separate from the person. You would use this second form for a car--a- ka.  I am wondering if the am form is an older form whose usage has begun to die out.

These two uses bring to mind differences in spiritual beliefs. In Christianity, body and soul are considered somewhat inseparable while the body is living. I think that is the basis for the belief in the resurrection of the body. In examining the language, it appears that the belief is that people are primarily bodies that have something called a soul. This contrasts with traditional pre-Christian beliefs of some American Indian groups that each of us is the spirit, and the spirit has the body. And, of course, other religions, perhaps most notably Buddhism, recognize the each person is a spirit that can be freed from the bounds of a body without the body dying.

There are two words in Choctaw for spirit, one of which is connected more with the body and the other usually referring to spirits that roam without bodies. Since Choctaws have been Christianized for hundreds of years, it is difficult to reconstruct those earlier beliefs, but it appears that these two systems represent a language change that also represents a change in thinking among many Choctaw speakers.
Posted by Holabitubbe at 7:14 AM No comments:

Language Change and Metaphors in the Choctaw Language

Language Change and Metaphors in the Choctaw Language

There are three recent historical events that have affected change in the Choctaw language: contact with Europeans and particularly American missionaries in the early 1800’s, removal of the Choctaw from their ancestral homeland in the 1830’s, and the loss of physical sovereignty as the result of the Dawes Act and subsequent statehood for the former “Indian Territory”.

First contact with Europeans occurred when DeSoto and his merry band strolled through Southeast U.S. Two words were borrowed from the Spanish, wak (cattle/cow) from vaca and katos (cat) from gatos. During the U.S. colonial period, the Choctaw and other Southeastern Nations were courted by many European nations, and the word shupo (hat) was borrowed from the French. Europeans brought new animals that needed new names. Sheep became chukfi ulhpoa (foraging rabbit), goats became issi kosoma (smelly deer), horses became issuba (like a deer), and mules are issuba haksobish falaia (long eared horses).The advent of conversions to Christianity caused the creation of many new words. Some words are transliterations of the English words, such as  Kilaist (Christ) or Chihowa (Jehovah). Other new words include ubai anumpuli chukka (the house of the word from heaven) for church and holisso aiithana (the place of learning from books) for school.

Removal split the Mississippi Choctaw into two groups with about 2/3 removing to what is now Oklahoma (then, it was outside the formal boundaries of the U.S.). The removed Choctaw formed themselves into a republic, establishing its own schools. This would have been a strong period for the Choctaw because they achieved 80% literacy in the Choctaw language during this time. There were newspapers, parts of the Bible, textbooks, official documents, poetry, and personal letters written in Choctaw during this time. In the meantime, the Mississippi Choctaw sunk into poverty as sharecroppers and without the benefit of any literacy. While still mutually intelligible, there are noticeable differences between Mississippi Choctaw and Oklahoma Choctaw.

Literacy ended in Choctaw when the nation status of the Choctaw was terminated through legislation and U.S. policy changes toward American Indians. Choctaw children then were schooled in English. This change in the language of education may have affected the language in other ways. For one, most modern Choctaw speakers are unable to read and understand the Choctaw of the 19th century. For example, the early name for Saturday was nitak hollo nakfish, the little brother of the holy day (Sunday). Today that is Satiti, a transliteration of Saturday. Bed has changed from topa to anusi (place for sleeping). The word hullo, which is related to holitopa (holy), and originally meant “reverence for something holy,” has been extended to express feelings for other people. This extension from one realm to another represents a metaphor.

The universality of metaphors as a way to create new meanings for old words is well represented in Choctaw. Essentially, Choctaws make metaphors in the same manner as speakers of other languages. For example, they use simile, issuba (issi holba/like a deer) and personification, nipi balit (balilit) kania (the meat ran away—said when a piece of meat falls on the floor), and oklhili nukshoblit pisa, they want to frighten the darkness.

Posted by Holabitubbe at 7:15 AM No comments:

Holabitubbe
I am Choctaw/Cherokee and a Fulbright Scholar. I am also an elder in Kalpulli Ehecatl, community of the wind, an Aztec dance group in the Mexica Red Tradition. I was in Aotearoa (New Zealand) to study Maori Language Revitalization and learning a lot. I have recently returned from visiting Scottish and Irish Gaelic revitalization efforts and currently live in Belize.